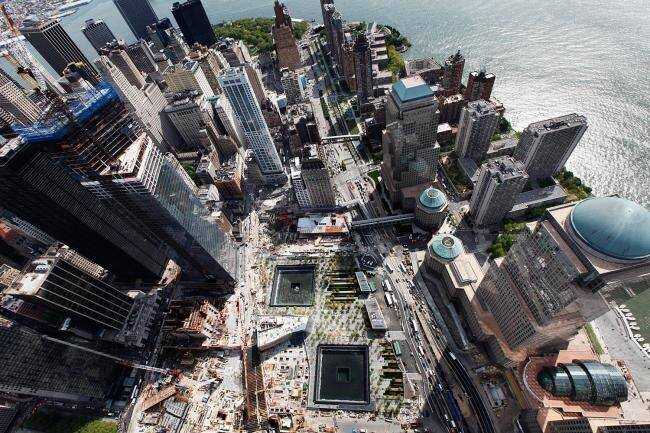 Air traffic was backed up. They were flying a holding pattern waiting for their turn to land at LaGuardia Airport in New York City. As they circled, she watched the city below her. It felt so far away and yet evoked such strong emotions. Neighborhoods passed below, traffic patterns could be seen, familiar places made famous through the lens of cameras for television--and tragedy.

Following along the river, the plane circled the city, slowly making its way south across Manhattan Island, then east to the ocean before turning back north to the airport. Just before the turn she saw the magnificent lady standing tall in the harbor with her light held high. The Statue of Liberty had greeted so many people to this country and this city. Then as they turned, the skyline caught her attention and tears began to flow.

The plane banked so that she was looking straight down into the Memorial of the Twin Towers with the construction of Freedom Tower beside it. In that moment she saw the images once more that were burned into her memory of a plane flying into the second tower as smoke billowed from the first. Pictures of desperate people fleeing the falling buildings and other leaping to their death; of emergency workers desperately fighting their way into the destruction as they fought to save lives flashed through her mind.

She remembered the pain and agony of that day . . . the fear . . . the need to pray . . . the need to hold her child . . . to assure herself that those she loved were safe. The emotions of anger, shock, frustration, and fear chased through her as she gazed down upon the memorial. Even though the wreckage was no longer there; even though the land was healed; the wounds of that day were still deep within her soul.

9/11 was a day she would never forget--and the stories of friends who were in New York that fateful day. One story in particular came to her again of a friend who had just crossed the bridge and saw the pillar of smoke go up in the rear view mirror, turning back as she realized anything that horrific would cause a overwhelming need at the hospital where she work. The friend returned to the hospital and worked the temporary morgue for the next several weeks as people claim the bodies of those they loved and lost. Her friend spoke of the despair of the city at that time, the outrage--and yet the acts of generosity and care.

As they landed at the airport all of these emotions raced through her system as she encountered life as it is now once more. Humanity's mix as people from all over the world met and mingled. She saw that life goes one. Yet as they stood, waiting to exit the plane, she could hear the whispers of others around her . . . "did you see it" . . . "the skyline will never be the same" . . . "we flew right over where the towers had been" . . . "I remember when they fell" . . . and so on.

Today is the anniversary of that day; of that horrible act. We remember--the horror and the bravery. It is a day that those who lived through it will never forget.

God, bring us hope. Comfort our hearts and spirits. Draw us to you. Teach us to love, to forgive, to grow to be more like you. Help us to eradicate hatred and intolerance. Fill our hearts with the desire to follow your ways. We open ourselves to you as we remember and lean upon your understanding rather than our own. You are our strength and refuge. So be it. Amen.