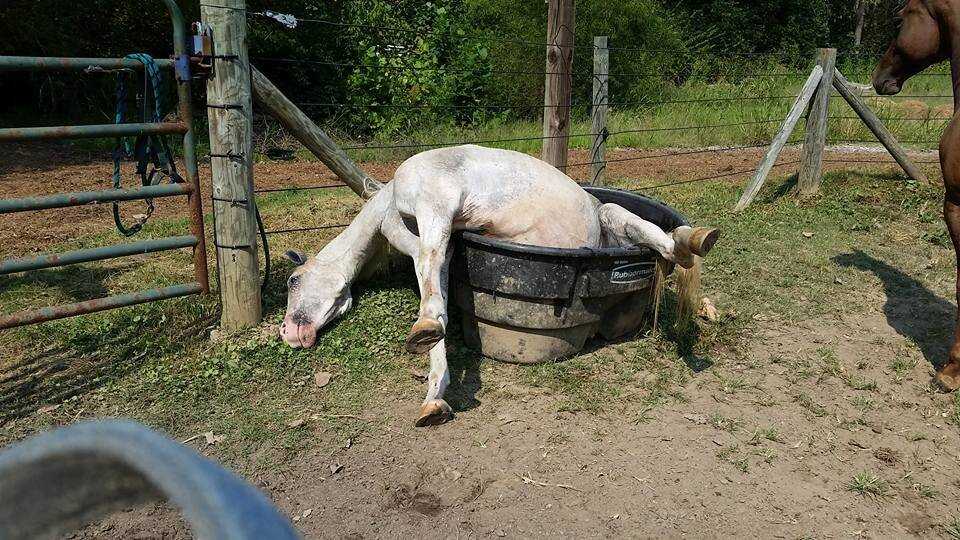 It was a glorious morning to be outside. They were having so much fun running through the fields with the sun warming them as the slight breeze kept them cool. Seeing mom near the gate they raced toward her.

As they came to the gate, they were neck and neck as they raced to be the first to her. He saw an opportunity to win if he could just slide through the gate first. Stretching out his legs as far as he could he was almost there. The opening was at a slight angle from them. If he could just twist his body, he could push her over slightly and clear the gate first.

There was a water tank near the gate. He kept an eye on it as they drew closer. She was slightly ahead, but he knew he could squeeze through if he cut it close to the tank and block her so that he won the race. Pushing with his last bit of speed he aimed for as close to the tank as he could get . . . almost . . . almost . . . everything came to a screeching halt. His feet flew out from under him. His body was suddenly wet and one leg was pinned under him. WHAT did she do?

The woman watched as the two horses raced toward her. She could tell they were going to cut it close to the water tank as they whipped through the gate to where she stood. The gelding was trying to push the mare over as they turned the corner by the tank, but the mare refused to budge and forced him over--using her body to block the opening. He was determined and tried to slip between her and the tank, but was too close and ran right over the water trough; lost his footing, went into the air and landed in the tank with one hoof. Of course the slip caused his to twist in the air and he splashed down into the tank--three hooves in the wind and one pinned!

She didn't know whether to laugh or cry. The look on his face of utter confusion as his rump hit the bottom of the tank. With one leg under him--he was truly stuck. She ran to him with the mare in tow. He didn't seem to be hurt, just stuck with his legs all akimbo, looking indignant and ridiculous at the same time. Pulling her cell phone out of her pocket, she called up to the barn and quickly had helpers to roll the tank to its side so he could free his leg as she calmed and soothed him. Nothing was broken. Just a very embarrassed horse--ticked off at the mare.

We often find ourselves striving . . . racing toward something. It might be a goal, a position, or an accomplishment. At times we see someone else heading for the same goal . . . and the race begins. We want to get there first. We want the acknowledgment . . . the recognition. Sometimes we win. Sometimes we don't. Sometimes along the way we find our feet fly out from under us and we are in an awful predicament.

Lover of us all, we are so reward oriented that we strive to gain your love and attention through our own feats, works, and ideas of greatness. Remind us, God of Love, that you want us to come to you as we are. You love each of us not because of our accomplishments but rather from our desire to accept your love, learn your ways, and share that with others. When we race to see who you love the best and slip along the way, you are always there to pick us up, set us on our feet, and love us because we are willing to come to you. Remind us that whoever we are, wherever we are on life's path; there is room for us with you. So be it. Amen.