Balls & Strikes
Corey Noles
Corey Noles, staff writer for The Daily Statesman and Editor of The North Stoddard Countian, is the author of a regular baseball/St. Louis Cardinals column and also uses his blog to sound off on various happenings in sports. He also operates a weekly baseball mailbag column. 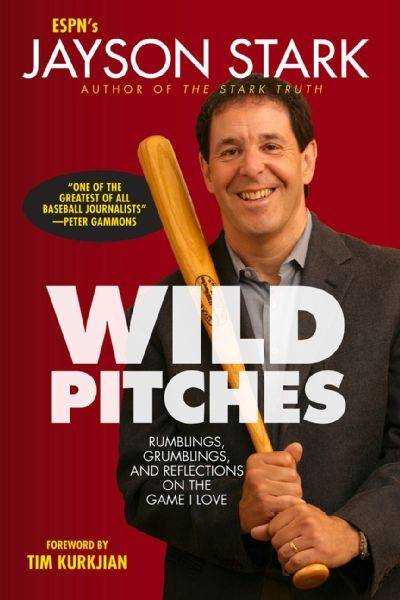 Many baseball-related books come across my desk over the course of a year.

Some of them are good, but get brushed aside for whatever reason--usually because I forgot about them.

The newest effort from Jayson Stark, longtime baseball writer for ESPN, got my attention in a hurry. Whether that was due to baseball reasons or the classic endorsement of Jon Hamm on the back cover is beside the point.

Truthfully, I was sucked in during his own introduction where he shares a tale of his sister. The book isn't just about the game, it's about the people of the game, and Stark captures them masterfully.

"Wild Pitches" is a collection of some of Stark's more poignant columns from over the years. Whether it's binging a tear to your eye or bringing out a good belly-laugh, the book will keep the attention of any true fan of the game.

An insightful writer and brilliant baseball mind, Stark manages to take the reader straight to the ballpark with him. You can almost see Josh Hamilton in his full uniform at the local Dairy Queen during Spring Training.

It's easy to picture Jim Leyland laying down the law as he tells what has to happen for his Detroit Tigers to right the ship, likely with a Marlboro dangling from his lip.

For me, though, the story that sparked my own personal memories was in Chapter 1, in a column entitled "Why Baseball Matters."

Stark tells the story of 80-year-old Ben Saperstein and how his grandson had taken him to the final game at old Tiger Stadium in Detroit. He recalled where Babe Ruth had stood and even where he had sat when he came to his first game.

The game was special to him.

It was special in that same way to both of my grandfathers, as well.

As I read Saperstein's tale, I recalled more clearly than ever my own early baseball experiences with my grandfathers--both of them.

I remember sitting at a Mazzio's Pizza in 1987 at Sikeston, Mo. with my grandfather, after whom my oldest daughter is named. We sat listening to the St. Louis Cardinals and Minnesota Twins battle it out in the World Series on his silver transistor radio--complete with a sticker of Billy Bob (of Showbiz Pizza fame) that I'd put there myself.

I've always thought that radio must have been a lot like one he had when he was about the age I was on that night. Heck, that could have been "the one!"

When our waitress came to the table to take our order that night, I remember grandpa raising his finger and asking--well, telling--the young lady to "Hold on, Ozzie's batting." He was kind about, but also made it clear that the pizza would have to wait--for at least one more pitch.

Stark's stories also reminded me of how my other grandfather would sit in his chair watching baseball--a game I've always felt was an extra special part of his life. He never went to many games or owned a lot of merchandise, but still my strongest memories are of him, sitting in his recliner, taking in an afternoon Cardinals game.

These aren't things that would matter to anyone else, but they bring me back to my own love for this special game.

In the column on Josh Hamilton, Stark made what is possibly the most poignant comment in the entire book.

"Sometimes, the stories we tell aren't really baseball stories. Sometimes they're just the stories of human beings--people who rise, who fall, who sadden us, who inspire us. We only use baseball as a reason to tell those tales."

With those eloquent words, he summed up his own book as only he could.

Give "Wild Pitches" a read. You won't regret it.

Corey Noles is a Cardinals Writer and Columnist for The Daily Statesman. He is also a regular contributor to Bleacher Report and KSDK.com. Contact him at cnoles@dailystatesman.com or on Twitter @coreynoles.