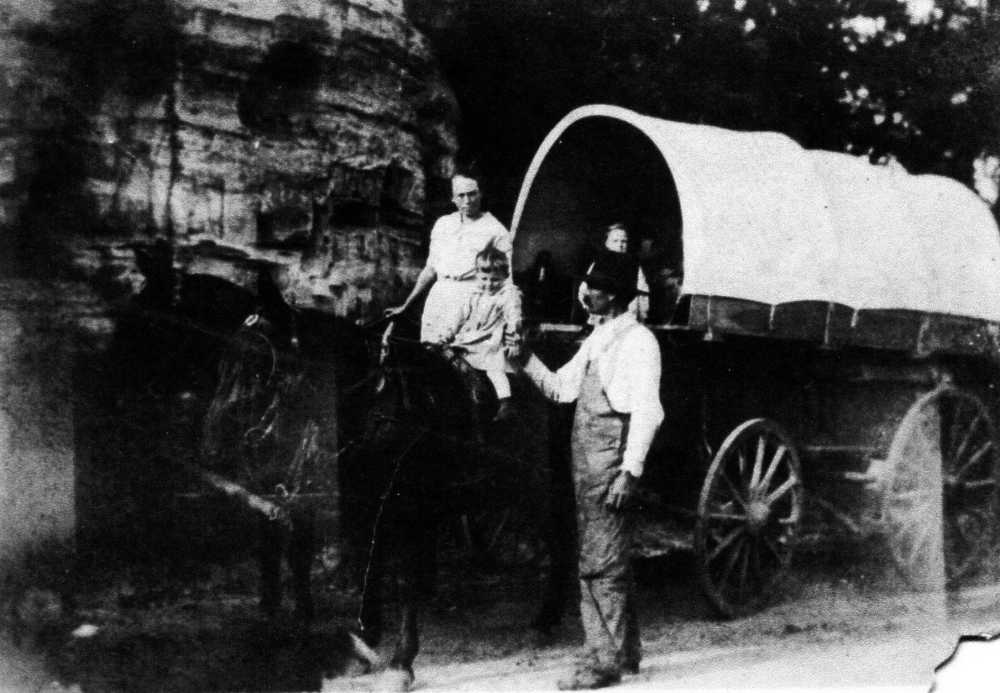 This old photo was sent to me by M.A. Hart. It was taken at Dutchtown, MO. in the fall of 1918 by the first big rock bluff going east on 74. Hart's grandfather Martin Allen (M. A.) Hart is standing by the mules, his uncle Amos is sitting on the mule, grandmother Hannah Iona (Melton) Hart is standing behind the team. His Aunt Clara Hart is standing behind the seat of the wagon. Other members of the family who made the trip were M.A.'s father Joe, and his uncles Starlus, Roosevelt,Mart, and Amos. They had left the small community of Herald, White Co., IL. a few days before and continued on to Advance, Bloomfield, Dexter and on to Parma. M.A.'s Uncle Walt made the picture, and he says that is another story.

Second in a series

Several blogs ago, I wrote about the issues facing the old Bloomfield Road just southwest of Cape Girardeau. There are a number of us in Stoddard County who share a fascination with that historic road, which played an important part in the settlement of Stoddard and many counties to the south.

In fact, the Monday, Jan. 25 meeting of the County Historical Society was devoted to the study of that beautiful scenic highway. The road has been in the news recently, after the Southeast Missourian published a small article about the possible widening of that stretch of highway, which gets far too much traffic. These "improvements" would virtually destroy the road, turning it into nothing more than a modern racetrack for motorists hurrying in from the south.

The newspaper article might have gone unnoticed, but it seems that Bloomfield Road has a large following of residents and visitors who have fallen in love with its canopied trees and spectacular fall colors.

Most of the travelers who take Bloomfield Road in and out of Cape have no idea of the history that lies behind that stretch of highway.

Though I'm going to give a brief history of the road here, I admit that Southeast webmaster and blogger James Baughn has done a much better job on his blog "Pavement Ends." http://www.semissourian.com/blogs/pavementends/entry/32692. In fact, James has been invited to speak to the Sto. Co. Historical Society at their next meeting - 6:30 p.m., Monday, Feb. 22 at the Stars and Stripes Museum in Bloomfield. James is equipped with all the "bells and whistles" that modern technology has - so I'm sure he will entertain us with a Power Point presentation to illustrate his talk. Mark your calendars NOW!

Bloomfield Road began as an Indian trail, which followed the high ground from Cape to the south. It has been called the "Shawnee Trail," the "Cape to Bloomfield Road," and the "Big Road." According to Jim Mayo, the road went all the way to Dunklin County. (Some of you may be aware that Stoddard County used to go all the way to the Arkansas line, before it was divided up between neighboring counties.) South of Bloomfield, the road was called "The Old Chalk Road."

According to Baughn, the road began at Sprigg and Good Hope in Cape, went past the old St. Francis Hospital, made its way to Bloomfield Street, and from there it wound out past Mt. Tabor school (beautiful stone building on the right just before you reach the trees which canopy over the road). Traveling along the bluffs, the road went to Dutchtown (keep to the bluff road) and then to Allentown, Route N, Hickory Ridge, Rum Branch, Toga, Lakeville, Tilman, Aquilla, and, finally, Bloomfield.

If these places are unfamiliar, click on James Baughn's blog, and he gives you a MAP (no kidding!) and photos along the route! (Oh, wow! It's great!).

As early as the 1830's, the road was used by stagecoaches; in fact, Advance residents remember an old stagecoach rest stop that used to stand by the gravel road going through Old Lakeville (now known as "Old Town," an unincorporated subdivision east of Advance.)

Ninety-five-year-old Paul Corbin says his mother remembers his family traveling by wagon from Greenbrier to Cape when she was about 8 years old. That would have been about 1904, since she was born in 1896. (See his blog on the NSC site.)

"They camped for the night at that spring on Bloomfield Road," Corbin said. "Then, the next day they would go into Cape, do their shopping, and come back to the spring, camp for the night - and then head back home. The trip took three days."

Corbin says that the road was all dirt when he first knew it. Then, later, it was gravel.

"It was the only way to get in to Cape from the south," Corbin said. "There was no bridge over that creek, so we had to follow it on the north side until we got to Cape."

To be continued in Part 3: The Civil War on Bloomfield Road

View 14 comments
Note: The nature of the Internet makes it impractical for our staff to review every comment. Please note that those who post comments on dexterstatesman.com may do so using a screen name, which may or may not reflect a website user's actual name. Readers should be careful not to assign comments to real people who may have names similar to screen names. Refrain from obscenity in your comments, and to keep discussions civil, don't say anything in a way your grandmother would be ashamed to read.