Remembering the days of the drive-in theater 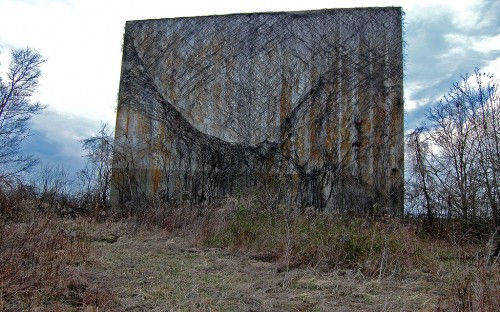 Those of you who take "the old way" from Dexter to Cape may have noticed the old abandoned Montgomery drive-in theater at Blomeyer Junction (near the new roundabout). I've wondered why the screen hasn't fallen down, so I was pleased to see Ken Steinhoff's new blog giving the history of the fifties hot spot. This structure is CONCRETE! It's going to be there long after we're dead and buried!

For those of you who have never checked out Ken Steinhoff's online blog called "Cape Central," http://www.capecentralhigh.com/cape-photos/bloymeyer-drive-in-theater/ you are in for a treat! I can't remember how I discovered the site: I think I was browsing on the Southeast Missourian website, when I saw a photo he had posted of the paving of Highway 25 at Advance around 1945. Ken writes about far, far more than Cape Central history, I'll tell you right now! The man's curiosity about local history knows no bounds. You never know what his topic will be from day to day.

Ken lives in Florida right now, so imagine my amazement, when he pulled up at the tiny North Stoddard Countian office one day last week. I had never met him, but I was immediately intrigued when I saw the camera around his neck. He introduced himself, his 87-year-old mother, and two other friends, who were along for a photo jaunt in my part of the country. Ken's mother used to live in Advance, so our little town has attracted his interest.

He kept looking for more employees at the office, so I had to say, "Sorry - I'm IT! I have it all to myself!" To his credit, he was amused, rather than horrified by my backwoods journalist appearance. I think I was wearing a sweatshirt and jeans. Papers were piled everywhere.

When Ken does a research story, he even posts aerial shots, so, of course, he had been out to the Painton Airport (6 miles or so east of Advance), where he had met another fascinating local historian, Al Painton.

In Ken's new blog about the old Montgomery Drive-in Theater at Blowmeyer junction, he posts a total of 9 photos, most from the present, but some from the past. As a newspaper photo journalist for many years, he knows how to dig up the old stuff. Ken started his career as a journalist in high school, went on to work for the Southeast Missourian, then moved around to other newspapers, ending up in Florida. You can read his background on his site.

I never knew the Montgomery Theater when it was in operation, though Ken discovered from the owner that it closed as late as 1980. My husband and I moved back to the area in 1975, so I guess we could have driven from our Advance farm to see a movie there. We didn't, and I regret that very, very much! It would have been a nostalgic experience.

The drive-in theater which has a special spot in my own memory is the one which used to be in Dexter. As I write, I find that I don't even remember where it was! How can that be? I guess I haven't thought about it in years, but that was the usual dating spot for my husband Dale and I when we were in high school in the fifties. We rarely went to the air-conditioned Weeks Theater on Stoddard Street, as that venue didn't offer us the ....uh..privacy..which teenagers so treasure.

Yes, there were mosquitoes..and stifling heat in the summer...and freezing cold in the winter.. and we always got the spot with the broken speaker, so we'd have to drive up and down through the ramps to find another speaker... but what a wonderous experience! We looked to see which of our friends were there - and sometimes we double-dated, and the excitement was doubled! (What were they DOING in the back seat??)

Horror movies were the BEST kind to see at a drive-in theater! It was so much fun to be scared and give your boyfriend a chance to play the big, strong hero who was there to save you from the werewolves and vampires! Back then, horror movies were scarey - not just gross the way they are now! Who wants to see blood and dismemberment?? Give me zombies, vampires, werewolves, the Blob, and Norman Bates!

AND - there was always the chance that your boyfriend would meet your EX-boyfriend at the concession stand - and your girlfriends would rush back to tell you that there was a FIGHT at the popcorn stand!

Oh, it was MAGICAL, I'll tell you!!! Each trip to the movies was an adventure! What would happen?? What would you have to talk about at school the next day???

As I sit here and look at that eerie, vine-covered movie screen, I am hopelessly caught up in the fantasy of a lifestyle gone obsolete. That screen, whether at Blomeyer or Dexter, is a treasured part of my past. I want to see the vines fall away, see the colors from the projection booth come to life, hear the speakers sputtering excitement, watch the dark figures of the guys in their flat-tops and school jackets, going to the concession stand to get their girl an over-priced Pepsi and popcorn!

Later note: I have had a call from a gentleman from Doniphan, Mo., and he informs me that there is an active drive-in movie theater in that community. Sadly, the the few drive-in theaters left in the nation must operate in summertime, only - so I'll have to wait until May to go sample the heady pleasures of outdoor film delights! I'm looking forward to it!

From the distant hills of Tillman - about ten miles and 55 years years away from that ancient movie screen - this is your backwoods reporter Madeline, daydreaming another golden November day away..

View 21 comments
Note: The nature of the Internet makes it impractical for our staff to review every comment. Please note that those who post comments on dexterstatesman.com may do so using a screen name, which may or may not reflect a website user's actual name. Readers should be careful not to assign comments to real people who may have names similar to screen names. Refrain from obscenity in your comments, and to keep discussions civil, don't say anything in a way your grandmother would be ashamed to read.