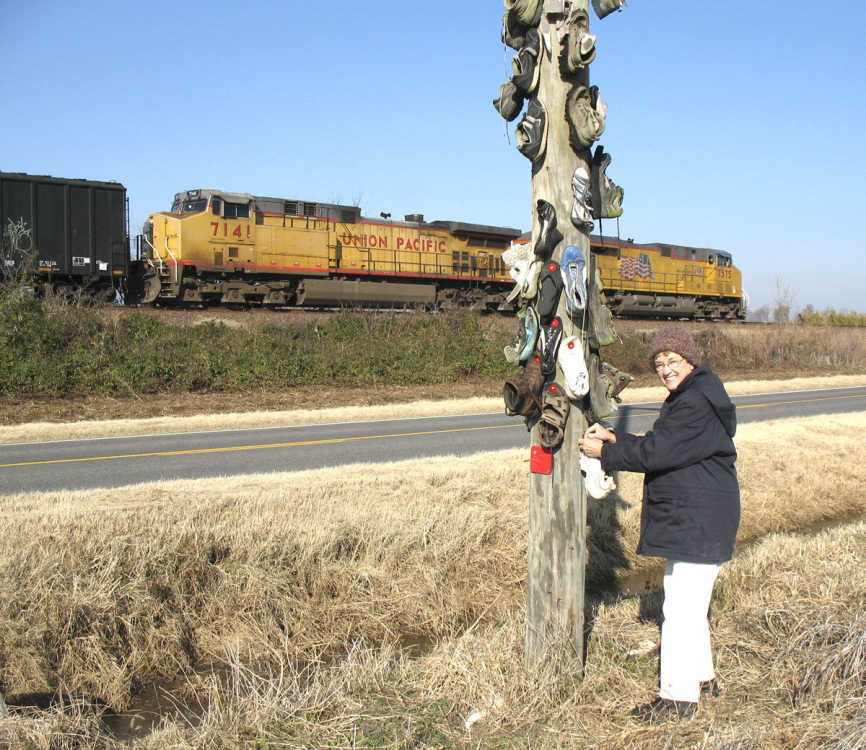 Which of my readers can identify the location of this historic shoe pole, which has been in this location for 30-plus years?? And, yes, the shoes go all the way to the top! How did they get there?? Who put them there? WHY???

One of the things I always loved about teaching in rural areas was the wonderful, kooky traditions that we country folk find entertaining.

When I taught in Bollinger County - Meadow Heights, to be exact - in the late 70's and early 80's, I had to laugh at some of the wild stuff those kids said and did.

That first year, the janitor said, "Mrs. DeJournett, you watch out on Halloween. All the buses will be late coming in the next morning, because the kids take chain saws and cut trees down over the bus route."

One of the boys came to school one day with suddenly-curly hair, prompting all his buddies to dub him "Milo Head." Had I not been a farmer's wife, I might not have caught the meaning of this reference, but I couldn't help laughing at him every time I saw him. His "new do" did, indeed, look like a stalk of milo! What made it even funnier was the fact that his girlfriend (a "foreigner" from someplace "citified" and sophisticated -- like Jackson) had talked him into getting the perm that made him the butt of his buddies' jokes. What a guy won't do for a pretty girl!

When I taught at Oran, I soon learned about the legendary shoe pole, located north of Perkins. It seems to me that the pole was already there in 1964, when I did my student teaching at Oran. Later - when I had gone full circle and had come back to Oran, 19 years - three schools - and two states later, I heard about the "Shoe Tree" again.

The "tree" is on the farm of Doris and Leon Kielhofner, and my student sources tell me that the first shoe was put there by Mark Kielhofner, though a story by the Southeast Missourian gave credit to someone else.

The current pole is the second one to be so adorned, as the electric company changes these poles out occasionally.

I found myself trying to explain the shoe pole again recently, when Ken Steinhoff, Cape Central High blogger extraordinaire, asked me to join his family in posting several pairs of shoes on the famous pole. Because I was feeding small munchkins at my home on Thanksgiving, I couldn't join them, so I went on my own later. Sure enough, they had left a special screw there for me! (And, no, Ken - It wasn't LOOSE!) You can see Ken's blog at www.capecentralhigh.com/cape-photos/new-steinhoff-tradition/.

The idea of a shoe tree isn't limited to Perkins, however, as Ken recently heard of a very famous shoe pole out west that was cut down by vandals. The act has outraged shoe pranksters throughout the United States.

These footwear specialists seem to relish the idea of empty shoes climbing up a utility pole. Perhaps the sight provokes some sort of flight fantasy, whereby the wearer of the shoes can imagine himself inside them, hoving just inches from the tip top, looking down on the surrounding countryside.

Maybe it's just the sheer idiocy of the project which appeals to passers-by. Motorists just don't expect to see footwear hanging from a vertical pole beside a little-traveled highway out in the middle of nowhere. (Pardon the reference, Perkinsites, but, as a resident of the no-longer-there town of Tillman, I feel entitled to use the tag "Middle of Nowhere.")

From the pleasant, rural atmosphere of North Stoddard and Scott County, this is your equally pleasant country reporter, Madeline, wishing you all a most prosperous, peaceful, and pleasing New Year. May your shoes carry you to new, exciting places, full of mystery and promise!

View 8 comments
Note: The nature of the Internet makes it impractical for our staff to review every comment. Please note that those who post comments on dexterstatesman.com may do so using a screen name, which may or may not reflect a website user's actual name. Readers should be careful not to assign comments to real people who may have names similar to screen names. Refrain from obscenity in your comments, and to keep discussions civil, don't say anything in a way your grandmother would be ashamed to read.