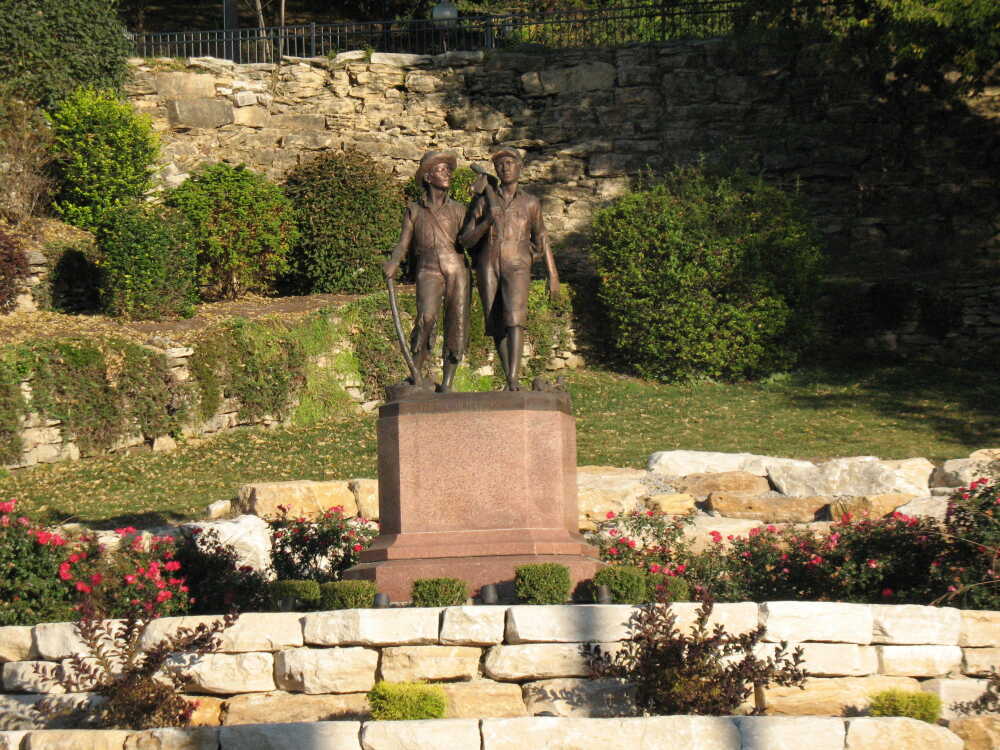 This statue of Huck Finn and Tom Sawyer graces the streets of Hannibal, Missouri, giving credit to the works of author Mark Twain.

Yes, the rumor you've heard is true - The famous American novel Huckleberry Finn has been rewritten, minus the infamous "N" word!

On Feb. 15, NewSouth Books will publish the edition, which has been supposedly "cleaned up" by Twain scholar and Auburn University-Montgomery professor Alan Gribben.

Those of us who have taught the book are well aware that the offensive word appears in the novel over 200 times - though I shutter to think that someone actually sat down and counted all these controversial words, making little hash marks each time he found one.

Published in 1885, the book has been controversial from the beginning. It is the story of a young, uneducated boy who grows up in the pre-Civil War South, where slavery is accepted as the social norm. He finds himself on the other side of the law, when he aids his friend Jim in escaping slavery and trying to rescue his children from another slave-holder. Their travels on the Mississippi are epic.

Gribben has substituted the word "slave" for the racial slur. He explains that the reason he's publishing the book is that it is no longer being taught in the public schools, because of the racial slurs against both blacks and native Americans (Remember "Injun Joe"?).

"All I'm doing is taking out a tripwire and leaving everything else intact," says Gribben. "All his sharp social critique, all his satirical jabs are intact. This novel cannot be made colorblind."

He explains that the one word is keeping many people from reading the book. He says that when he is doing public readings and substitutes the word "slave," he hears "audible signs of relief." He admits that intelligent, educated readers can recognize that the book is an anti-racist book written in the pre-Civil War South, using the language of the times.

But, he says, "when the younger reader is staring at that word five times on a given page and the instructor is saying, 'Mark Twain didn't mean this and you have to read it with an appreciation of irony,' you're asking a lot of a younger reader."

Needless to say, his action has caused a firestorm, and I myself am sufficiently horrified to make up for all those readers who don't give a flip, one way or the other.

However, I see his point. I have had students walk out of my class because of the "N" word, when I know that if they would just give the novel a chance, they would see how truly anti-racist it is. When young Huck decides to go against his upbringing and his entire society to help a black man gain his freedom and "steal back his children," he feels that he is going to hell - but he does it anyway, because he sees the slave Jim as a man - not a piece of property.

If the publishing of this "politically correct" version of the novel does no more than promote a healthy discussion of the issue, I feel that it's a good thing.

For librarians, who are charged with the task of choosing which version to stock on their shelves, I suggest that they do both. Let readers (and teachers) choose which version they prefer.

As for me, I really love what Cindy Lovell, the executive director of the Mark Twain Boyhood Home and Museum in Hannibal, Missouri, said about the issue.

"We are not fans of changing Mark Twain's words," she said."They have stood the test of time. The book is an anti-racist book and to change the language changes the power of the book. He wrote to make us squirm and to poke us with a sharp stick. That was the purpose."

From the snow-covered hills of Tillman, Missouri, this is your rural Mark Twain-loving reporter, Madeline, signing out on a beautiful winter's day.

View 15 comments
Note: The nature of the Internet makes it impractical for our staff to review every comment. Please note that those who post comments on dexterstatesman.com may do so using a screen name, which may or may not reflect a website user's actual name. Readers should be careful not to assign comments to real people who may have names similar to screen names. Refrain from obscenity in your comments, and to keep discussions civil, don't say anything in a way your grandmother would be ashamed to read.