Escaping the Sunshine State with my life 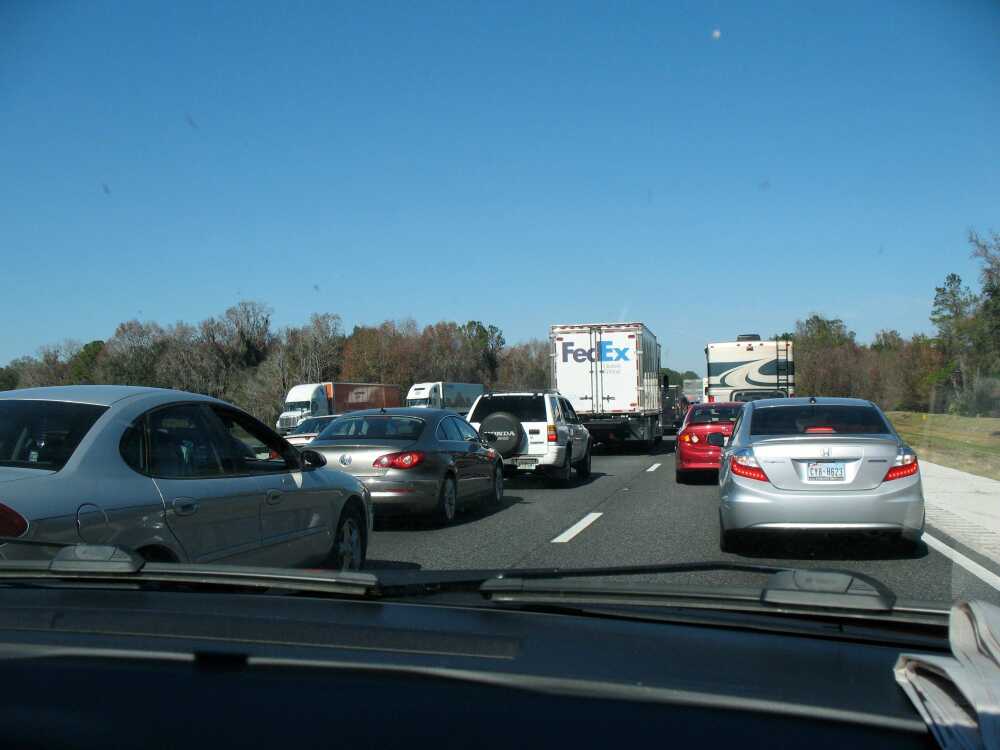 This the view we saw for almost 3 hours, as we tried to leave Florida yesterday--Interstate 75 was backed up for 4 miles.

In leaving our Ft. Myers vacation spot yesterday, we made the unwise decision to take Interstate-75, the "fast way" back to Missouri.

Big mistake! Little did we know about the ill-fated reputation of that interstate route. Four years ago, four people were killed and 38 were injured on another nearby Florida highway, when the smoke from a brush fire obscured the road.

The same thing happened in the early morning hours yesterday, Sunday, Jan. 29, 2012. As we were sleeping, chaos was afoot on I-75 south of Gainsville, Florida. The smoke from a wildfire obscured the road, and 19 cars, trucks and campers came crashing into each other, injuring 18 and killing 10.

One woman described the horror of hearing the sound of the crashes and the screams of the injured. Another survivor described how he and some friends were in their car in the darkness, when another vehicle hit the second car, going at least 80-miles-an- hour and hurling the man underneath a tractor trailer truck. The man was killed.

Paramedics, responding to the emergency, had to listen for the screams. They couldn't see amid the smoke of the fire and the burning vehicles. The fire was so hot that the pavement melted.

We left Ft. Myers about 7 a.m., unaware of the havoc which awaited us. There was nothing on the news, though a Facebook friend of mine said she saw it on MSNBC quite early. Unaware, we chose to take the interstate home, instead of taking Hwy 27.

Shortly after going through Ocala, we hit the traffic block. It was 11:30, some 8 hours after the accident. Traffic was heavy in the three north-bound lanes; there was hardly any in the south bound.

It didn't take long to realize we were in trouble. As the hours dragged by, men began to leave their cars to go the bushes. After awhile, the dogs began to bark from car windows, and their owners took them out to the grass.

After about an hour and a half, we could see drivers beginning to panic and bolt for the shoulder of the road. In typical Florida fashion, many of them tried to change lanes, pushing their way in front of the more compliant drivers.

As the lock-up entered the third hour, I myself began to lose my grip on sanity, and I watched the side of the road for a secluded place to relieve myself. We were moving along at the rate of about two miles an hour. We had hit a patch of road in which there were no exits for 18 miles, so we were stuck.

I'm sure the conditions were horrific on that awful Sunday morning, but I've spent the month of January observing Florida drivers, and I have to say that they are truly frightening--especially on 6-lane highways. The way they weave back and forth, from lane to lane, with no regard for their own safety or that of others, it's as they don't care if they live or die.

We should be home in Missouri late tonight. I pray to God that I will live to see my grandchildren again.

From a bumpy highway south of Jackson, Mississippi, this is your roving reporter, longing to be back in Stoddard County.