The day Advance was almost blown away 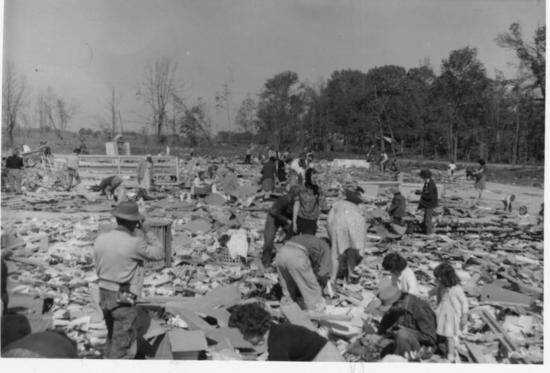 (Photo courtesy of Paul Corbin) This photo shows the residents of Advance sorting through about 300,000 pairs of shoes at the demolished Inland Shoe Warehouse on April 30, 1963, after a tornado destroyed the building.

This week, I've been reading about tornadoes. I've never experienced the excitement of such a destructive force, and I admit that I would rather live the rest of my life without partaking of that dubious pleasure.

Ever since I came to Advance 40 years ago, I've heard stories about the tornado of 1963. I admit that I wasn't paying much attention to Advance in 1963, as I was going to college and getting married in March of that year. I don't even really remember the earthquake that happened on my wedding day, March 3, but they tell me it happened. I was a little distracted.

However, yesterday, when I googled "Advance tornado of 1963," several sites popped up--one that I had even posted on the Dexter Daily Statesman website myself several years ago--Paul Corbin's account. You can read it here on this site, written in his own unique style.

My old friend Ken Steinhoff also researched the subject a while back, and you can share some fascinating stories from Advance residents, if you go to www.capecentralhigh.com/cape.photos/advance-train-depot.

Ken starts out by talking about the old Advance train depot, but his readers soon lead him to the story about how the Frisco engineer and crew saved several lives on April 29, 1963, by warning the town of the tornado's approach.

Ken, ever the expert researcher, found the April 30, 1963 Southeast Missourian account of the tornado. You can scroll along the original story and see photos taken at the time. Just go down through the comments, until you see a highlighted place where he writes "This is the Missourian's account of the tornado that hit Advance in 1963." It is fascinating! The years roll away, and you can see it, as if it just happened yesterday! The old black and white photos capture the destruction.

As I read all these accounts, I realized that, in fact, Advance has experienced not one, but two tornadoes on April 29. The Missourian article makes reference to an April 29, 1909 tornado, as well. I didn't know that.

According to the Missourian account, the nearby town of Randles was hit especially hard by the tornado in 1963. Nine homes were destroyed and one person lost her life.

In fact, an eye-witness account by highway patrolman Norman Copeland, who was chasing the storm, indicated that he saw three funnel clouds bearing down on Advance. The one that hit the ground was obviously the same one that took out the Inland Shoe Company warehouse, south of the train tracks.

In a particularly grizzly anecdote, the Missourian reports the tale of a Randles man who saw a dog picked up by the twister and hurled head first into the ground.

The Missourian story said that the '63 tornado was the second one in two years to hit Randles.

In researching tornadoes, I learned that Missouri has had 668 of them in the years between 2000-2011 and there have been 234 fatalities.

As I write this column on March 31, 2015, the sun is brilliant and the temperature will reach the mid-seventies. Nothing could be more unlikely than a tornado.

Let's hope it stays that way!

View 3 comments
Note: The nature of the Internet makes it impractical for our staff to review every comment. Please note that those who post comments on dexterstatesman.com may do so using a screen name, which may or may not reflect a website user's actual name. Readers should be careful not to assign comments to real people who may have names similar to screen names. Refrain from obscenity in your comments, and to keep discussions civil, don't say anything in a way your grandmother would be ashamed to read.