The prowler who wasn't there 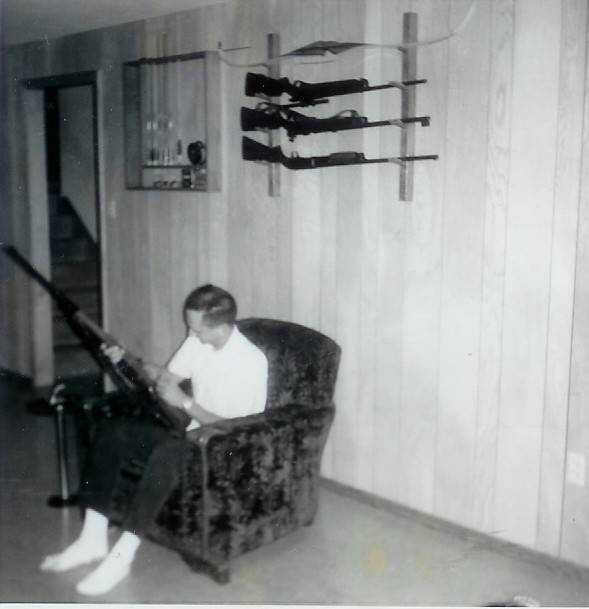 This is the only photo I can find of our basement, before my husband converted it into an apartment.

Though some people have cause not to trust social media such as Facebook, I have to admit that this current over-popular fad has given me some very special friends and reconnected me with some long-lost voices from my past.

Just last week, I was contacted by a young lady who was gathering addresses for the 1960-1970 Cape Central High School class reunion.

She wasn't a student of mine during those years, though her brother was.

I asked her if she remembered the "night of the burglar." She did. However, she didn't remember how that incident turned out.

My husband had converted the lower level of our split-level home into an apartment. This young lady, a high school student looking for independence from her parents, rented the basement apartment for a period of time. She was supposed to have a roommate, but that person cancelled out on her, so Miss Linda lived there by herself.

She had her own entrance, a cute little living room, kitchen, bedroom, and bath. It was a nice setup.

I stumbled out of bed and ran down to the kitchen on the ground floor level. As I turned on the light, a pillow came flying up the stairs from the basement, following by a cute blonde teenager in shorty pajamas.

"There's a prowler in my apartment!" she whispered.

We stood together at the top of the stairs, staring into the darkness below.

Then I thought better of it and said, "I'd better call the police!"

"Oh, no! I hope they don't turn their sirens on," muttered my renter.

In no time, two uniformed policemen were there, flashlights shining through the darkness.

After a thorough inspection, they came up with the verdict--no sign of forcible entry, no footprints in the wet grass around the house, no wet footprints on her floor. The back door was still locked from the inside.

"What makes you think there was a prowler?" a kindly officer asked my young ward.

"I heard him!" she said, in a frightened voice. "I heard him rattle the canisters on my kitchen cabinet. Then, I heard the 'swish, swish, swish' of his pants, as he walked toward my bedroom!"

I'll admit, her description made chills run up my spine.

With nothing more to go on, the officers had no choice but to leave. We went back to bed, but I don't think I slept a wink. I was pretty bleary-eyed at school the next day.

I could hardly wait to tell my husband what happened. He listened to the details, and then he laughed!

In typically logical DeJournett fashion, he had already figured out the answer to the locked-door mystery of the prowler who wasn't there!

The answer? The "prowler" was the automatic ice maker on the new refrigerator: Canisters rattling--ice cubes being kicked out of the trays! Pants swishing together--water refilling the trays!

I have told this story many times over the years. It makes for a very eerie tale with a happy ending.

I'm not sure if I'll go to the reunion, but it would be interesting to see if Miss Linda has aged!