Growing up with brothers 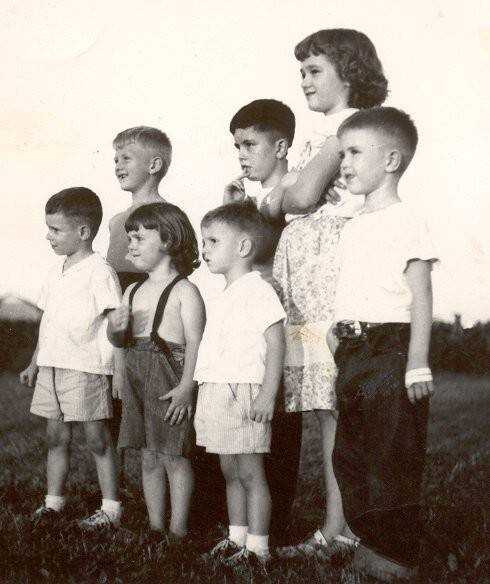 Here I am, the oldest of my cousins and siblings. My brothers, Dave and Tim, are on the front row. As usual, I was put in charge of rounding them all up for photos--no small task. I'm amazed they stayed still long enough for Dad to click the shot!

My life was peaceful until I was four and a half years old. Life was good. My parents loved me. The days were predictable and relatively calm, except for an occasional (and I'm sure well-justified) temper tantrum on my part.

Then, one day, quite unexpectedly, there was a new addition to our household, and life never returned to normal.

The small intruder was quite calm and innocent (at first). He lay in the iron-railed baby bed by the window, looking up at me with furrowed brows, so serious and quiet, giving no indication of the madcap chaos he was to bring into our lives.

Unfortunately, he was merely the first of four such little innocent-looking creatures who would later invade the calm space of my placid existence.

He may have been the first, but he was by far the most intrusive.

In the early years, I dressed him up in girl clothes and named him "Suzy." He had shiny, honey-colored curls that sprang back like coils, whenever I brushed them. I remember the first time Mom took him to the barber for a haircut (much to my dismay). When his golden locks were shorn, he looked into the mirror and said, "It's a boy!"

He was only 18 months old when a second boy came along, and I began to get the distinct feeling that my life was going downhill fast.

I look through the old photo albums and realize now how cute my brothers were, dressed alike in their little red and white-striped blazers and shorts, all ready to go to the airbase in Malden that Easter day, when all the base personnel was invited to a dinner and Easter egg hunt.

The thing about the old photos is this: The pictures are STILL SHOTS. In reality, my brothers were never still. Whatever David, the older of the two, wanted to do, Timmy would try to follow, often with disastrous consequences.

Case in point: Did they listen to me when I told them not to jump off and on the mobile transport carriers called "shrimp boats," used to take the cadets to and from the flight line? It was supposed to be a day of fun out at the airbase where my dad worked, but it was ruined when my brother Timmy, trying to follow his older brother, lost his footing and rolled, head over heels, beneath the carriers. By the time I ran back to him, he was lying on the pavement, watching his left leg bend in a way no leg should bend. I ran screaming back to the adults, and an ambulance came for Timmy. He had to start the first grade a year later than the other kids.

Example number two: Did Timmy have to follow his older brother's example, when they were on the playground of the old Boyd country school, across the highway from where we lived? Just because David knew when to let go of the tree branch all the kids were riding, that didn't mean his younger brother knew the secret. Or, maybe Timmy's bones were just more brittle. He broke an arm on that incident.

One day I came home from high school to find a little green snake, lying on the dresser in my bedroom. "Ha!" I thought, "Do they think I'm going to be frightened by a rubber snake??" I poked at it, and then noticed a tiny drop of blood on its head. "Ack!" I shrieked. "It's real!!!" I maintained my composure and later confronted my brothers, only to discover that they had found the snake dead, thought it was "pretty," and put it on my dresser for me to admire. Who knew brothers could actually be sweet?

I feel sure that my three younger brothers and one sister influenced my career choice. Thirty-two years of teaching were nothing, compared to the trauma of living with brothers.