The Adventures of Bruce the rooster 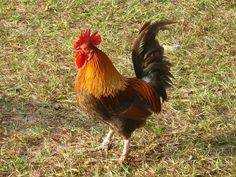 A recent story by a fellow columnist has reminded me of the adventures of Bruce the rooster, a particularly feisty banty rooster who terrorized our farm, when my daughter Kristin was a toddler. That reference dates this story at 30 years ago. The little feathered devil made such an impression that I haven't had chickens on the farm since then.

This particular chicken was supposed to stay at the barn, but my son Todd found the baby chicks, after their mother disappeared, so he gathered up the cute little balls of yellow fluff and brought them up to the house, where they were allowed to run free in the yard.

As the odds would have it, half were hens and half were roosters, and all but Bruce were picked off by an assortment of local hawks. We came home one day to see a small pigeon hawk "fly-dragging" a hen off into the bushes. Too late to save her.

Bruce, undoubtedly, was more than up to the task of fending off hawk attacks, being of a warrior nature not unknown to banty roosters. He had sharp spurs, and he knew how to use them.

Everyone on the farm knew to steer clear of him, since he was known to attack both human and canine residents with no provocation.

I myself developed a terrible crick in my neck from whirling around to fend off unexpected rear assaults, as I was working in my flower beds. Often, the rustling sound I heard was no more than the wind in the leaves, but, often as not, it was Bruce, taking advantage of my temporary bent-over position on the flagstones of the patio to attack me from behind with his spurs. I would scream, leap to my feet, and kick the crap out of him, a response he seemed to enjoy mightily.

My two sons had learned the joy of tormenting the feathered fiend by teasing him, and, when the beast attacked, they would scamper out into the yard, leap into a hole that they called their "fort" and cover themselves with a large piece of plywood. Bruce, thoroughly flustered, would stalk angrily around the make-shift fort, as the boys pelted him with dirt clods.

As winter came, the boys' fort sat abandoned until warmer days, and Bruce took to circling the house, waiting for someone to come out and play. When no one did, he found entertainment by leaping up on the living room window ledges, peering inside for victims. My daughter Kristin had begun to walk, and she took great delight in seeing the little brightly-colored rooster, "playing" with her through the closed window. His antics were quite entertaining, and she laughed delightedly, as he strutted back and forth, showing off his orange and gold feathers.

When spring came, the family once again went outside to enjoy the sunshine, and Bruce the rooster's fate came upon him.

I had clad my daughter in long pants, jacket, and bonnet, and she was toddling along the sidewalk, when her little window playmate decided to launch an attack.

One scream from the child ended the feathered creature's reign of terror on our farm.

Fortunately, I happened to have company that day, so there were five able-bodied children and two adults who were more than willing to chase the rooster, until we ran him to ground. As he lay there, panting, we snatched him up, put him in a dog carrier, and had him removed to an undisclosed location--I knew not where, and I did not care.

Thus ends the tale of Bruce the Rooster, may he rest in peace--or a stew pot--whichever comes first.