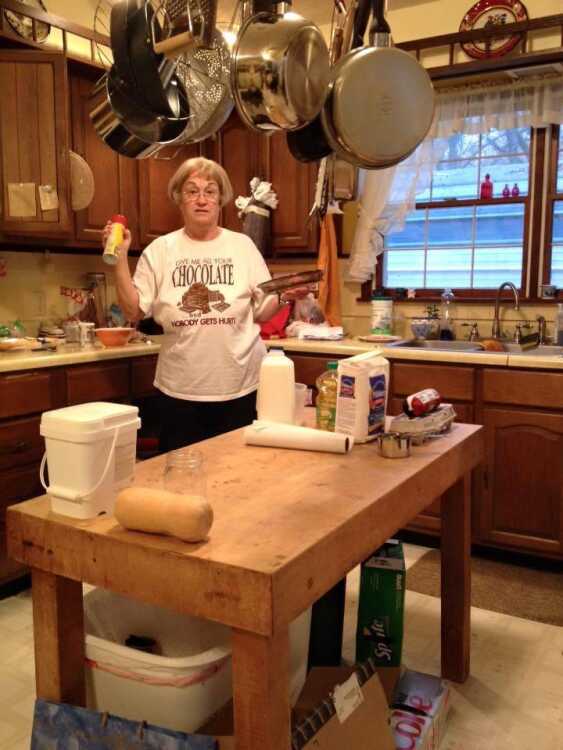 This is me in my kitchen, beginning the biscuit making process!

I confess that I don't like to cook. I realize that this disinclination for puttering around in the kitchen is a cardinal sin, but, as my BFF says, the only reason I have a kitchen is that it came with the house.

However, I do like to make biscuits, and my son Matthew loves them, so, when my daughter-in-law Laura asked me to show her my "secret," I was more than happy to oblige.

My house was uncharacteristically full this Thanksgiving holiday. The old walls must have fairly glowed with happiness, as my daughter and her boyfriend came for the Thanksgiving meal, and my son and daughter-in-law came with the grandchildren to spend the night Friday.

Saturday morning was Biscuit Day, which involved the entire family. My sister Kathy, visiting from Springfield, sat at the table and took pictures, my son wrote down the instructions, and the two children popped in now and then to check on our progress.

I have no recipe, of course. The whole project begins with a 70's era yellow mixing bowl. When I need more than one batch of biscuits, I use the yellow bowl to mix up another.

As I compiled the ingredients, Laura measured them into proper measuring cups and spoons, and Matthew wrote it all down, chuckling mischievously. I suspect he added his own embellishments to the instructions.

Let me add that my daughter-in-law is an excellent cook, probably because she loves the culinary arts--so she already knew how to make biscuits. They just "didn't taste like Mom's."

An essential aspect of my biscuit-making is that I've never had an uncluttered space on my counters to roll the biscuits out, and I hate the mess, so I mold them by hand. I also add ice cubes to the milk mixture. Other than that, it's pretty standard.

I made the first batch, and Laura made the second batch. When we sat down to breakfast, my grandson Evan asked which batch was which, as they looked almost alike, and six-year-old Sophia said, "That batch is mama's--I can tell by the glass dish!" Observant child! Evan, ever loyal, chose his mama's biscuits, and they were delicious!

My sister Kathy reminded me that Saturday's biscuits were a far cry from those I made 52 years ago, when my husband and I were first married.

"They were so hard that Dale had to crack them open and eat the insides!" Kathy said.

True! I admit it! I baked them like cookies, and he could have used them to throw at the starlings in the back yard.

My sister also remembered my first attempt at gravy. It was the consistency of thick paste. I would set the bowl on the breakfast table, and my husband would silently lift the spoon, and then just as silently put it back down, without partaking of the contents of the bowl. It was months before he would even try the gravy.

Fortunately, my daughter-in-law has the gravy skill down pat. Good thing. Gravy is a bit trickier than biscuits.

It was a wonderful holiday, full of memories. When I'm long gone, I hope my grandchildren will smile as their mother makes the biscuits on those future Saturday mornings.