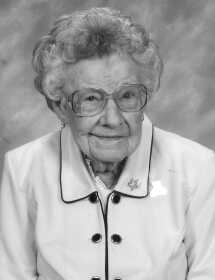 Mrs. Vaughn was a member of the First Christian Church Disciples of Christ, owner of Petite Beauty Salon in Dexter for 50 years, a member of the Order of the Eastern Star #311, a volunteer at Dexter Memorial Hospital and a resident of Dexter.

She is survived by one son, James D. Vaughn and wife Carole of Dexter; two daughters, Alice Ann Griffey of Dexter and Sharon Richardson and husband Phillip Ray of Springfield; and two grandchildren, Paula White and Jason Vaughn.

Funeral services were conducted on Tuesday, Sept. 21, 2010, at 10 a.m. in the Rainey-Mathis Funeral Chapel with Dr. Larry Colvin officiating.

Interment followed in the Dexter Cemetery.