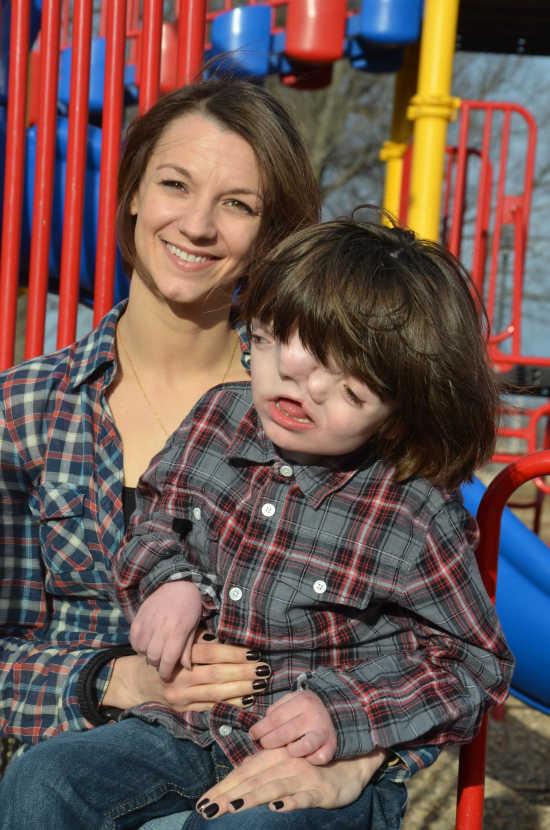 Purchase this photo at dailystatesman.com COREY NOLES-cnoles@dailystatesman.com Brandy Johnson of Bernie is working hard to get her 10-year-old son, Tres, the medication she believes will help to improve his quality of life.

Brandy Johnson thought it was a normal pregnancy, but had her suspicions.

When her third child, Tres, was born, the Johnson's life forever changed.

Tres was born with a disease called Diprosopus, which is Greek for "two faces," and is commonly referred to as Cranial Duplication. There are only 35 known cases throughout the world.

Most human infants born with the disease are stillborn, with only a few surviving more than minutes or hours past birth.

Tres is not one of those children.

"He's our little miracle," Johnson said. "He wasn't expected to make it through the first night, and we just celebrated his tenth birthday. It's a real blessing."

An inquisitive young man, Tres is all smiles and enjoys toys as well as the chance to discover new places.

With that said, his life hasn't been easy.

Despite countless surgeries, he suffers from severe epilepsy which first appeared when he was four months old. Over the years, seizures have become numerous.

At his November 2013 doctor's appointment, a test revealed that Tres experienced in the range of 120 seizures per day.

"We've been on every medicine you can name trying to get him help," his mother said. "Some things make a small difference for a few weeks, but it never lasts."

Tres was even surgically implanted with a Vagus Nerve Stimulator (VNS) that shocks his body every 20 seconds for a total of seven seconds each time.

Johnson said while the implant is somewhat painful, he handles it well.

Each time he has a seizure, his mother holds a magnetic bracelet over his implant that serves to shorten the seizures.

For the most part, the seizures are short in duration and frequent, but not always.

"He has to be resuscitated four to six times per week," she said, noting that it's not full CPR, but rescue breaths to keep his airways sufficiently opened up. "He's died in my arms twice."

It was late 2013 when Johnson came across the story of Charlotte Figi, a six-year-old from Denver who suffered from 300 grand mal seizures per day and found significant results from cannabis oil.

After learning of the oil, Johnson approached Tres' doctors, but due to laws and hospital policy, they were reluctant to discuss the oil. She did learn, however, that several other patients had found success with its use.

With Missouri not having a medical marijuana law in place, it was difficult to find out what was legal.

She eventually came across a form of CBD oil that is completely free of THC, making it legal in Missouri. Desperate to find a solution that would change her child's life, after she was certain the oil was safe for her son, she ordered it.

For the first two weeks, Tres' seizures decreased from more than 100 per day to five or six per day--a dramatic difference.

In the weeks that followed, the seizures returned, but at a much decreased rate over prior years.

Now, Tres suffers from as many as 50 seizures per day.

"It's still a lot, but it's an improvement," Johnson said. "What I have personally seen this oil do really changed how I feel about the marijuana debate."

The problem is that the oil available in Colorado is much more powerful, and Johnson believes it could completely change her son's life.

"I'd move to Colorado tomorrow if I could afford it," she said.

The problem is that in Missouri, marijuana is classified as a Schedule I drug, meaning that there is no legitimate medicinal use.

"Cocaine and heroin are Schedule II drugs and can be used by doctors," Johnson said. "It just doesn't make sense."

The problem is that a simple medical marijuana law may not be enough to do the job. While Illinois and Michigan allow marijuana for medicinal use, individuals under 18 cannot be prescribed marijuana--even the oil.

It's for that reason that Johnson and her son travelled to Jefferson City on Monday, March 10, to testify in favor of House Bill 1659 that would decriminalize marijuana in Missouri. The bill would regulate marijuana in a way similar to alcohol--establishing a taxation and regulation system similar to those in Colorado and Washington.

"I'm not saying it doesn't need to be controlled, because it does," Johnson said, but her hope is that marijuana could become a Schedule 3 drug in Missouri.

To become a Schedule 3 drug, three findings must be in place:

2. The drug or other substance has a currently accepted medical use in treatment in the United States.

If marijuana was treated as a genuine medication, Johnson said she believes that her son would feel a dramatic benefit.

"It's a long road, but it's got to start somewhere," she said.

In the meantime, in an effort to give her son the care he needs, Johnson has had to withdraw from nursing classes at Southeast Missouri State University during her second year.

"We've all had to make sacrifices, but that's just part of it," Johnson said.

Her husband, Joshua Johnson, and their two other children, 13-year-old Trenton, and 11-year-old Nicholas, have all made their fair share of sacrifices as well.

"The other kids have been so good through everything for their brother, but I know it's been tough on them," Johnson said.

She hopes that one day the stigma attached to the use of the drug she believes her son so desperately needs, will disappear.

"Sometimes things in life don't work out the way you expect," she said. "God always has another plan, and you just have to have faith in Him to carry you through."

In the meantime, through the political battles and doctor's visits, the Johnsons are left to wait and hold out hope that one day soon things will begin to fall in their favor.

--Johnson will be speaking at a Town Hall meeting on marijuana policy reform in Sikeston scheduled for Tuesday, March 25, at 6:30 p.m. in the Clinton Community Building.

Comments
View 3 comments
Note: The nature of the Internet makes it impractical for our staff to review every comment. Please note that those who post comments on this website may do so using a screen name, which may or may not reflect a website user's actual name. Readers should be careful not to assign comments to real people who may have names similar to screen names. Refrain from obscenity in your comments, and to keep discussions civil, don't say anything in a way your grandmother would be ashamed to read.
Respond to this story