Family-friendly make over kicks off at Wappapello Lake 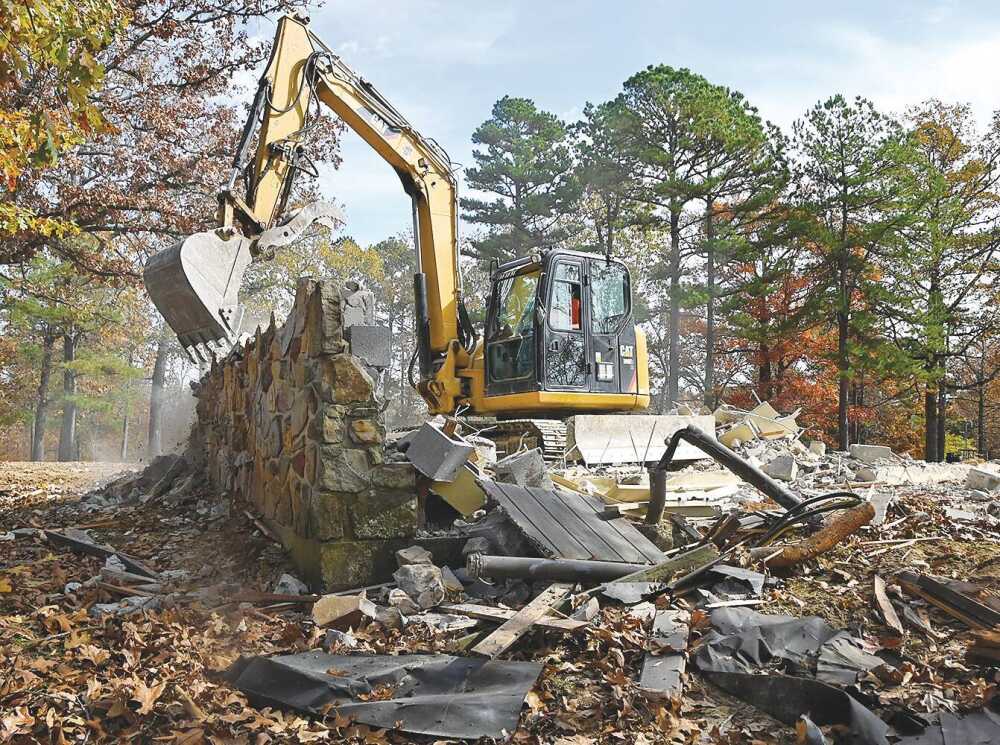 Crews work to demolish the old restroom building at Wappapello Lake’s Redman Creek West campground. In the spring, five new restroom and shower houses will be built at the lake’s most popular recreation areas.

WAPPAPELLO — Campers and other visitors to Wappapello Lake will see big improvements to some of the lake’s facilities when they visit next spring.

Five new restroom and shower houses will replace older ones in some of the most popular recreation areas, said Park Ranger Rosie Lemons.

“We put in for supplemental budget packages for new restrooms, and we received it in the last fiscal year,” she said.

The new restrooms and shower houses will be prefabricated concrete structures, and with funding in place, they already have been purchased.

Replacement of the outdated facilities, Lemons said, focus around improvements to accessibility, convenience and privacy.

All, but one, of the new buildings will feature individual, lockable restrooms for privacy.

“Parents who are wrangling small kids will have their own private space. They can close the door, lock the door and take care of their business. It’s really customer friendly for families,” said Wappapello Lake Operations Manager Bart Dearborn.

“The other big thing is all the new buildings will be fully ADA accessible. It opens the door for us to meet the needs for every visitor who comes in,” Dearborn added.

“It’s an older building nearing 35 years of age. There’s step-downs going into the showers, and it’s not very accessible. Everything in there was old and needed attention,” said Lemons.

“It will be a family-style restroom and shower house and will be a huge improvement,” Lemons said.

Each separate room will feature a toilet, safety rails, shower, sink and benches.

“They are going to have baby changing stations because our customers have asked for those,” added Lemons.

In addition, every door will be wider than normal to accommodate wheelchairs.

In the Redman Creek East campground, two smaller, family-style shower houses with restrooms will be built.

“They won’t be as big as a full shower house, but instead will be a mini shower. They will accommodate one person on each side at a time,” said Lemons.

Even with the smaller size, she said, the change will be a “huge improvement.”

People’s Creek Beach’s current restroom sits on a steep hillside and offers poor accessibility, but a new facility will be located closer to the beach.

“That area is going to be redesigned and improved along with the restroom replacement,” Lemons said. “The new one will be down where people can get to it without walking up stairs.”

The new building also will be a family-style design, with four separate rooms.

The current restroom at the Eagle Point Recreation Area on the north end of the dam is the oldest at the lake, Lemons said, and dates back to the 1970s.

The planned new facility will feature a similar open layout, instead of individual rooms like the others, but will be located closer to the road for easier access.

Crews already have begun the demolition process on the older buildings and will prep each site over the course of the winter.

“We’re demolishing the old buildings now, and when that’s done, we’re going to come in and prepare the sites and stub up pipes and get them ready,” said Lemons. “Once the buildings come, we have to hook utilities up, which won’t take that long and pour sidewalks.”

Currently, it is hoped the new buildings will arrive in early spring.

“We’re thinking it will be 30 days tops to get them open once the buildings are here,” Lemons said.

Staff at the lake are hopeful the buildings can be completed before the recreation areas open in the spring.

“Our goal is to have these done before we reopen Redman West campground and People’s Creek Beach. We’ll do everything in our power to not have any disruption,” said Lemons.