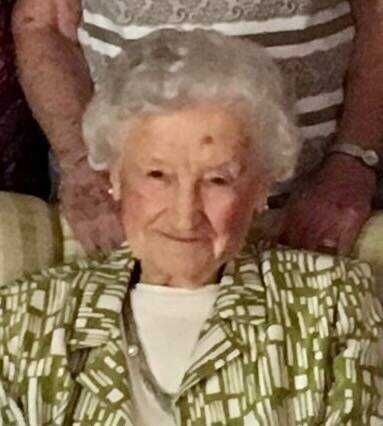 Barbara Rhoades, daughter of the late Albert Gardner and Jennie Adcock, was born in April of 1926, in Matthews, Missouri, and departed this life in December of 2021, in Bridgeton, Missouri, at the age of 95 years.

Mrs. Rhoades was a former telephone operator for Michigan Bell. She was a member of First Baptist Church in Dexter, Missouri, and a former resident of Dexter.

In April of 1946, in Piggott, Arkansas, she was united in marriage to Huey Rhoades. Mr. Rhoades preceded her in death in March of 1995.

She is survived by two daughters, Sheryl Rhoades-Durrer and husband Dan Durrer of Washington, Missouri, and Karen Schwent and husband Edward Schwent III of Bridgeton, Missouri; by her sister, Jane Cantrell of Mississippi; by two grandsons, Kyle Durrer and Travis Durrer; and by two great-grandsons, Thomas Durrer and Charlie Durrer.

Other than by her husband and parents, she was preceded in death by her brother, Joseph Gardner; by four sisters, Fannie Margaret Green, Mary Lee Chartrau, Alberta Ingram, and Peggy Tanner; and by her grandson, Edward Schwent IV.

Memorials may be made to Friends of Wolfner Talking Book and Braille Library, PO Box 24834, Kansas City, Missouri 64131.