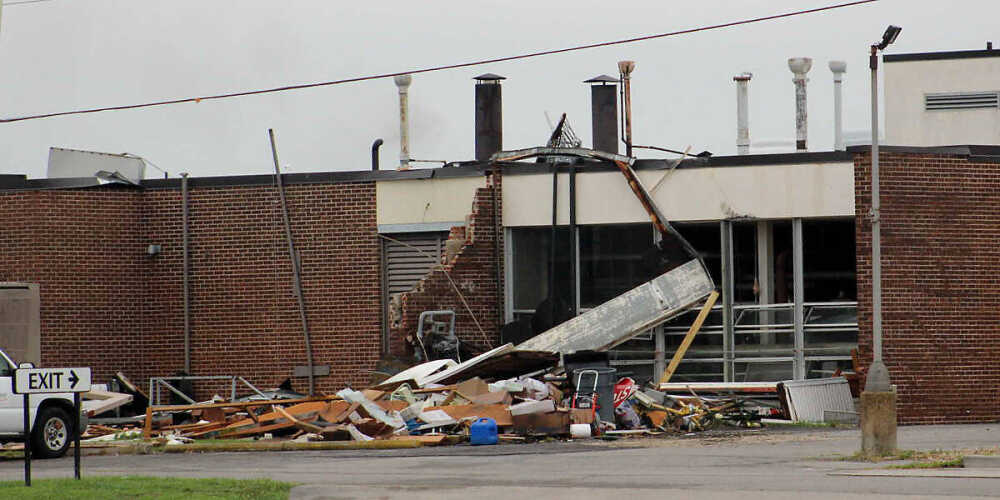 Damage is seen on the north side of the SoutheastHEALTH of Stoddard County building in Dexter after Saturday's confirmed EF-2 tornado went through the area.

An unusually wet weather pattern has settled over the region, bringing with it heavy rains and even an out-of-character tornado.

Worse, there’s potential for more rain in the forecast.

Those totals, she said, are what has occurred at the Poplar Bluff Regional Business Airport.

The wetter than normal conditions are the result of the region sitting on the south side of a stationary front, with warm southerly winds bringing moisture from the Gulf of Mexico.

“If it (the stationary front) stays north of us, we just stay in southerly flow with south winds,” Trevino said. “And as long as we have these south winds, they’re always bringing up moisture.”

Numerous thunderstorms, some severe, soaked the region Saturday evening, and brought a rare tornado to the Dexter area.

The EF-2 tornado began around 8:18 p.m. Saturday, just west northwest of Dexter, before it crossed Highway 60 and tracked through the city and ended after 11 minutes on the ground.

With winds estimated at around 120 mph and a path 175 yards wide, the tornado was on the ground approximately five and a half miles.

According to the National Weather Service and local reports, more than 150 homes were damaged and one mobile home was flipped onto its roof.

Most damage, according to the NWS, was to home shingles, siding and facia damage.

Hundreds of trees also were uprooted or snapped, many causing structural damage to homes.

The SoutheastHEALTH hospital in Dexter, which was forced to evacuate patients to other facilities, suffered heavy damage, with windows blown out, ceiling panels destroyed and an attached structure blown away.

In addition, several vehicles at the hospital parking lot had windows blown out.

“That was unusual. Tornadoes aren’t usually the thing in July,” Trevino reported. “In fact, that was the first EF-2 we’ve had since 1971 in the month of July.”

A short break from the rain is expected Wednesday, Trevino said, before more moves back in Thursday.

“It starts up again Thursday into Thursday night, then really gets going on Friday,” she said. “From Friday through Monday, there’s pretty much constant rain chances.”

As of now, Trevino said, it looks like the region could see an average of a half inch to an inch of rain over the weekend, with locally heavier amounts.

“You get a thunderstorm over a certain area that doesn’t move much, and the next thing you know, you’ve got spots with 2 inches,” Trevino said.

That means there is potential for flash flooding in areas where storms set up, she said.

“It’s absolutely possible if you get a few storms over the same area,” she said. “That will definitely be something to keep an eye on pretty much through the weekend and even into Monday.”