Bunyan Tales
Paul Corbin
Paul Corbin is a 100-year-old historian, humorist, and amateur archaeologist from Advance, Mo. He grew up in the Greenbrier area west of Advance, where he attended Stepp School on the banks of Cato Slough and the Castor River, important waterways throughout his life. In an age when many area residents did not go to high school, the young Corbin made the decision to walk the five miles to Zalma, graduating in 1933. Throughout his life, he was an enterprising businessman, selling Watkins products from house to house throughout a large area - and later opening a variety store in Advance. He and his wife Geneva traveled throughout the United States, even following the route that the Lewis and Clark expedition traveled. His knowledge of Native American culture is extensive, and he has donated a sizeable collection of his artifacts to the Cape Girardeau Conservation Nature Center and the Bollinger County Museum of Natural History in Marble Hill. Throughout the years, he has submitted articles to TBY, the North Stoddard Countian, the Ozark Mountaineer, and several other Missouri publications. He has also written two books - "Reflections in Missouri Mud," and "Fragments of my Feeble Mind." The first one is out of print.
Recent posts
Archives 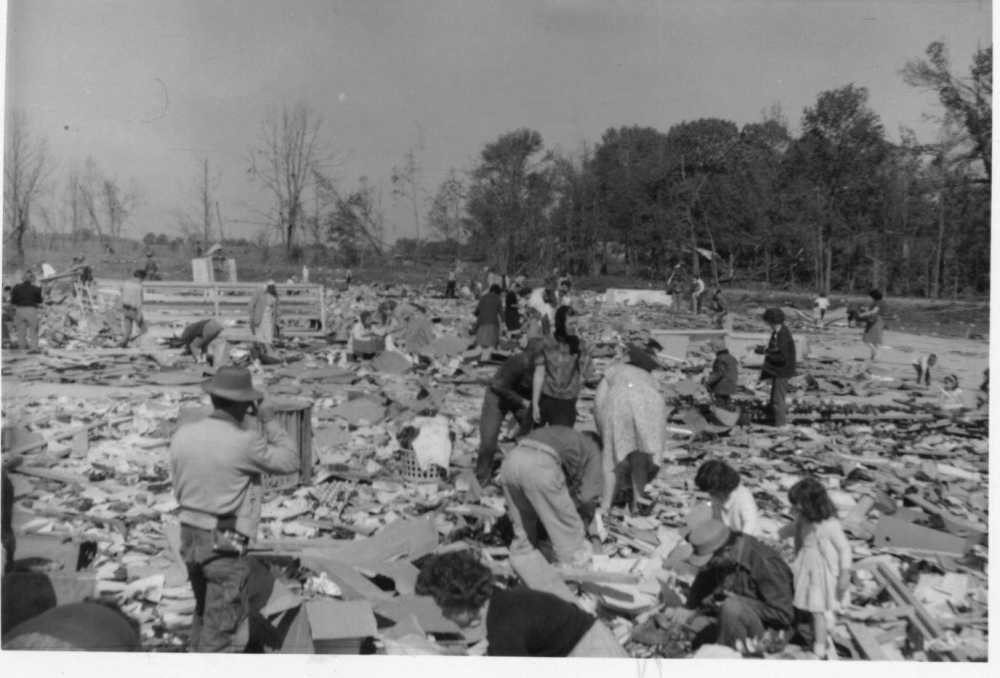 This is what was left of the Inland Shoe Factory after the tornado of 1963 in Advance. Three-hundred thousand shoes were scattered all over town.

Back in 1943 I hired a small, two ton truck to hauled all my worldly possessions from Memphis, Tennessee and dump them in a small house at the corner of Grisham and Sturdivant St. in Advance, Missouri. That would make it 66 years that I have called Advance "My Home Town." When I came here, there were no paved streets, and there were still a few farmers coming to town in their horse-drawn wagons.

For 30 years, my wife and I owned and operated a Ben Franklin Store in the center of town, retiring at age 56, then spending 27 years rambling over a large part of these United States. My travels thoroughly convinced me that there is no place better than Southeast Missouri, Stoddard County and especially "My Home Town" of Advance, Missouri.

The census records for 1900 show Advance as having a population of 221. When I came to town, there were only 614 people living here, and today we have 1,245 good citizens living in town, most of them living in beautiful modern homes.

Basically, Advance has been a quiet and tranquil town, but over the years we have had a few exciting moments. The Bank of Advance was robbed on May 27, 1959, when three men took about $18,000.00, but they were quickly apprehended and convicted. This bank was robbed again n October 15, 1962, when a lone bandit took about $9,000.00. The robber had cut the telephone lines, so the bank could not report the robbery, and when Alma Mashek, one of the bank employees, came rushing into our store to report the robbery, I thought she was drunk. She was white as a sheet and staggering, as she came rushing down the aisle to use our telephone. The robber made a clean get-away, but was recognized about a year later by Claudine Lorch, another bank employee, as he was conducting a band concert at Jackson, Missouri. He was apprehended and convicted of the crime.

Another big event in the history of my hometown was "the Tornado of 1963." It was a rather hot day for the 29th day of April, and a gentle breeze of high humidity was coming in from some dark clouds that were building up back in the west. By about 3:00 p.m., these clouds seemed to be rolling and tumbling, and there was an oppressive stillness around us.

At 4:00 p.m. on this Monday afternoon, the engineer of the Frisco train noticed a funnel cloud low on the ground and following along behind the train. He gave the engine full throttle and kept his whistle screaming, as he came into Advance. The train passed within a few feet of the Inland Shoe Company warehouse, where 14 employees were working. The wailing scream of the train whistle alerted these workers, and they didn't have to ask any questions, as this black funnel cloud could be seen bearing down on them. They all jumped in their cars and headed out of town. The warning of this train whistle no doubt saved their lives, as the 180 X 140 foot warehouse was completely demolished, and 300,000 pairs of shoes were strewn over the countryside along the tornado's path.

The whistle of the train alerted the entire town and people were running in every direction to seek shelter in a storm cellar or leave town. One lady, a Mrs. Scott Wright, said that she didn't really run, but she went around some that were running. As for myself, my wife and I were at home working in the yard, while Eula Bruce and Lucetta McCullough were managing the store.

When the train whistle alerted everyone, our telephone rang and Eula asked what they should do. I told her to lock the doors and come to my basement or get out of town. They jumped in a car and headed south, past the warehouse, and when they were about ˝ mile south, they looked back to see the shoe factory explode into the air. At this point,the tornado bounced back in the air and other parts of the town received very little damage.

The next day there were people with boxes and burlap bags coming from every direction to pick up shoes. In this salvage process, everyone wound up with mismatched shoes, and it was interesting to watch as one person would ask another one if they had a size seven for the right foot to match the size seven they had for the left foot.

This matching process went on for several days, and the next week I ran an ad in the local paper asking everyone who had unmatched shoes to bring them to the city park on Saturday and do some trading for shoes that would match the ones they had. This turned out be an interesting and hilarious brawl, as dozens of people poured their boxes and bags of shoes out on the ground, and started digging through them to find a mate for the shoes they were carrying in their hands.

After this ball was over, there was about a pick-up truck load of shoes left in the park, which I hauled to an abandoned building out on my farm. I told people they could stop by to try to find a pair of shoes. I finally brought this episode to an end by burning the mismatched shoes.